Tetranex would like to pass on a huge congratulations to the Dr EP Scarlett Robotics team for their participation in the FRC Western Canada Regional event April 6th through 8th.  Tetranex was a sponsor of the team and we joined the crowds and proudly cheered them on during the competition.  From our own experiences, we know that participating in events such as these has a huge impact on the education and career paths for a number of these students.  Tetranex looks forward to working with Scarlett Robotics in the future to see how they build from their experiences at this competition. 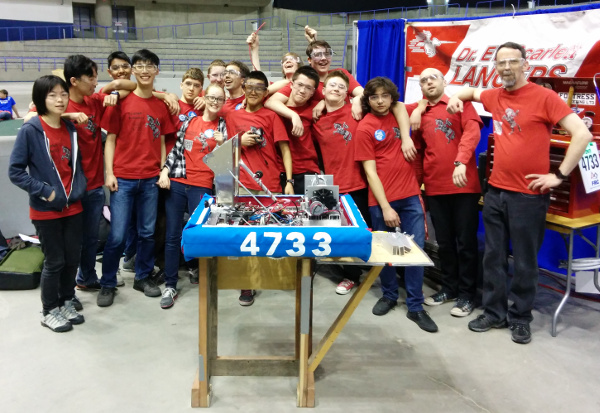 If you missed the competition this year, make sure you check it out next year.  We also strongly encourage financially sponsoring a team.  These students need to raise around $10,000 in order to design and build a competitive robot.  This is a hurdle that prevents some schools and organizations from assembling a team at all.

The FIRST Robotics Competition is open to high-school students and under strict rules, limited resources and a six-week time limit, teams must raise funds, design a team “brand”, hone teamwork skills and build & program industrial size robots to play a challenging field game against like-minded competitors.  The circumstances are as close to real-world engineering as a student can get. 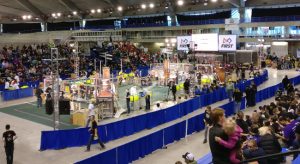 The Dr EP Scarlett Robotics team participated in the Western Canada Regional event which included 49 teams from Canada, the USA, Mexico, Australia, China, Poland and Turkey.  This year’s challenge was FIRST STEAMWORKS where alliances of three robots each prepare for a long distance airship race by collecting fuel to build steam pressure, installing gears to engage rotors and ultimately climb aboard their airship by traversing their robot up a vertical rope.  The  clip at the end of the post explains it better than words can.

The FIRST (For Inspiration and Recognition of Science and Technology) organization was founded to inspire youth interest and participation in science, technology, engineering and mathematics (STEM).  FIRST is considered the leading, not-for-profit STEM engagement program for kids worldwide.