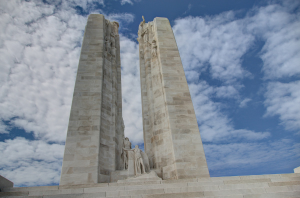 One of the greatest examples of how leadership and innovation can propel an organization to achieve incredible goals played out in Canadian history 100 years ago this month.  On April 9th – 12th, 1917, the Canadian Expeditionary Force executed their mission in retaking control of the strategic Vimy Ridge position in France.  Along with incredible personal sacrifice, the victory at Vimy Ridge was possible largely in part due to the culmination of leadership and innovation within the Canadian Forces.  Tetranex has always strived to emulate aspects of the Canadian Expeditionary Force in our corporate culture and we have discussed these parallels with our team.

When the Canadian Expeditionary Force assembled and entered the Great War in 1914 they were perceived as a liability to the British forces.  The British wanted to mitigate this risk by blending the Canadian recruits in with the existing British divisions.  Sam Hughes, the Canadian Minister of Militia and Defence, in defiance to the wishes of both the British and Canadian governments, mandated that the Canadian Forces be deployed as distinct divisions.  They were inexperienced, lacked formal training and were poorly equipped.

By 1917, the British and French military were putting the plans in motion for the Battle of Arras in an attempt to push back and break the long standing Western Front.  The opening phase of this battle depended on regaining control of Vimy Ridge to ensure the success of the remaining offensive.  The French armies had previously attempted to retake the ridge and suffered staggering losses.  For the first time in the Great War, the Allies put all four Canadian divisions together as their best chance for success at Vimy.  Over three years, the Canadian Forces had transformed themselves from a noted liability to one of the Allies greatest assets.

Transparent Ranks:  The Canadian Expeditionary Force was structured with the ranks and hierarchy of the traditional British military but avoided the caste like segregation between them.  In the British system, high ranking officers were well educated in military strategy and placed directly into leadership roles.  This is how the wealthy kept themselves and their children out of the trenches.  The lower ranks were treated poorly and offered little to no opportunity for advancement.  The Canadian Force had none of this history or legacy.  Battalions were organized by their region of recruitment so soldiers often knew and worked with each other in their previous civilian lives.  There was no sense of entitlement with the Canadians and information and ideas flowed easily from the trenches back to command and vice versa.

Command Intent:  The British and French forces, at the time of the Great War, worked under a Chain-of-Command control model.  You followed orders from the ranks above and passed orders through to the ranks below.  To keep troops coordinated, orders had to be dished out in small manageable steps.  Once these orders were executed, new orders would be communicated to advance the overall mission.  The sole advantage of this model was that it relied little on the capabilities of individual soldiers.  As long as enough of them effectively carried out their orders, the mission would likely succeed.  The disadvantage of this model was that if anything went wrong and severed the Chain-of-Command, these isolated troops could no longer be depended on to continue advancing the mission.

The Canadian Forces, largely due to Arthur Currie, behaved under a Command Intent model.  Instead of passing on sequences of orders, the overall intent of the mission was communicated to all participants from the start.  By understanding the overall intent of the mission, troops were aware of what they had to achieve to contribute to the success of the mission and they understood how they fit into the broader picture.  This also gave them an idea of what others would be doing and how each other’s success was correlated.  Currie took this concept even further and cross trained troops to be proficient in multiple roles, including leadership of their own platoon, should the need arise.  This model eliminated all of the disadvantages of the Chain-of-Command and while it relied more on the capabilities of individuals, the Canadian troops rose to the challenge in heroic fashion.

A Culture of Innovation:  The structure and leadership of the Canadian Expeditionary Forces lent itself to an environment of innovation.  Currie would often take ideas from the front lines and incorporate them into larger strategies.  This could never have happened under the traditional rigid hierarchies and the Chain-of-Command model.  The list of innovations attributed to the Canadian Expeditionary Force during the Great War is extensive.  From perfecting the creeping barrage, maps for every soldier, artillery position locating to seemingly simple ideas like battle rehearsals, the Canadians innovated to adapt to the changing strategies of war.  Canada’s initial liability in not having a deep history of military strategy turned into their greatest asset because they were not burdened with this legacy of “how we’ve always done it” and were free to innovate. 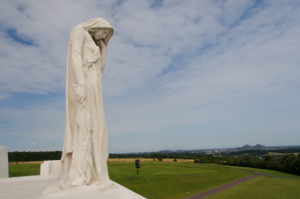 The victory at Vimy Ridge was not Canada’s alone nor did it single-handedly change the outcome of World War I.  The victory did, however, cement the culture and model of the Canadian Expeditionary Force and to some extent, the nation of Canada itself.  And while there are some aspects that can absolutely be drawn upon for any organization, the human sacrifice and sheer determination under horrific conditions simply cannot be adequately understood or appreciated by any corporate model.

We encourage everyone to take the opportunity of the 100th anniversary of the Battle of Vimy Ridge to refresh their knowledge of the rich history around the Canadian Expeditionary Force in World War I.  Beyond the parallels that any organization can draw from, there are amazing stories of perseverance, sacrifice and both the best and worst of humanity.