Measuring interface in separator applications can be very problematic.  Interface is the boundary between two immiscible fluids that have different densities, for example oil and water.  Interface measurement finds the boundary between the two liquids and is used to control the flow of the top and bottom fluids out of the vessel with minimum contamination. The dissimilar density or specific gravity of the two liquids means the lower density liquid will float on top of the higher density liquid. Interface control is critical to plant operation with the goal to eliminate any oil in water that can cause off-spec issues and can ruin filter media.  Between oil and water there is often a “rag layer”, which is a transitional interface that contains a mixture of fluid with unknown densities.  The rag layer causes issues when determining fluid levels and chemical injection, such as demulsifer, is often used to minimize the rag layer thickness.

Several types of level technology can be used in measuring interface.  Two popular technologies that are widely used are guided wave radar and nuclear profilers. 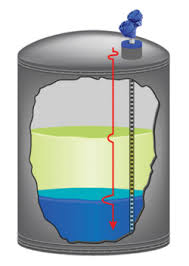 A significant proportion of the microwave energy is reflected back up the probe to the transmitter at the point of the liquid level layers.  The transmitter measures the time delay between the transmitted and received signal and distance is calculated.

Guided wave radar has several advantages.  It can be accurate for interface and can be used in many applications included liquids, sludges, slurries and some solids.  No compensation is required for changes in density, however dielectric constants must be known and a large rag layer can cause issues.  A major disadvantage of guided wave radar is the probe design.  Probe installation can be problematic, build up can occur in the chambers and vessel internals must be considered. 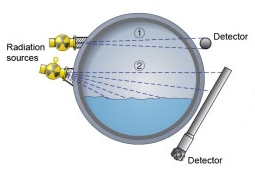 Nuclear technology also provides continuous measurement that uses nuclear radiation to detect density variations used to infer levels and interfaces.  A radiation source is mounted on one side of the tank and releases energy through the wall of the vessel and process fluid.  A detector mounted on the other side of the vessel will measure the amount of radiation absorbed in the fluid and vessel components.  In most cases, multiple detectors will be used to cover the full range of the vessel when utilized for level measurement, and a single detector is utilized for level switch applications.  If a vessel has a large rag layer a nuclear profiler can be used.  The nuclear profiler can be placed at the rag layer with each detector providing a continuous density output at its location.  As these outputs change on multiple detectors, the change in the interface can be determined.

Some advantages of nuclear technology include a non-intrusive design.  Nuclear control will automatically adjust for temperature changes and it is un-affected by high temperatures, pressures or abrasive materials. A downside to nuclear technology is that it is very expensive and has many safety concerns.  Licencing and regulatory controls must be applied as well as regulations for maintenance and disposal must be implemented.