A Primer on Process Control – Part 2

The sight of control blocks on a Piping & Instrumentation Diagram (P&ID) may seem confusing and daunting for the uninitiated, but having some basic understanding of process control can help in deciphering these little black boxes of logic. The following will build on the knowledge of PID-controllers, discuss more complex controls beyond cascade control, and provide the reader with a brief overview of various control schemes typically encountered in industry.

There are many cases in industry where a simple single-variable control is not the only controlling variable on any given line. There may be other competing constraints at that same location. Examples include limiting both discharge pressure and temperature on a compressor, or level control on a slurry tank with a minimum discharge flow to prevent plugging.

Depiction of a high/low selector on a control diagram can indicate what variables are being compared. This can be comparing min/max of two PVs, or more likely, the comparing of OPs of two controllers. This latter scenario is more likely because it would be difficult in most cases to compare engineering values of two different properties. In the case of comparing OPs, the direct-acting/reverse-acting nature of the controllers will determine the control output and the high/low selector will simply select the higher/lower signals. Let’s look at the slurry tank example. 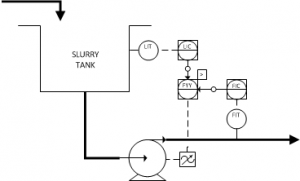 The primary control in the above example is a direct-acting level controller manipulating VFD of the outlet pump (i.e., as level rises, a higher discharge flow is needed to bring the level back to SP). Because the commodity is slurry, there is a possibility of plugging in the downstream line if a minimum flow is not maintained. Therefore a secondary, reverse-acting flow controller will cause the VFD of the outlet pump to increase whenever the discharge flow rate drops below the flow controller SP. In this case, a high-selector is used to give preferential control to the flow controller during low flow conditions. Also note that the SP of the secondary controller should be set such that during normal operation, it will not be active controller in order to prevent unnecessary competition.

Another common type of control scheme can be seen in many injections/mixing controls. There can be two school of thought for implementing Ratio Control. 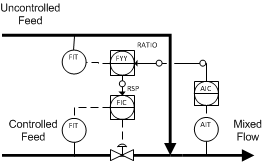 Ratio Relay Control – measuring one flow, applying a ratio multiplier, and using this as the setpoint (Remote SP, or RSP) to control another flow.

Flow Fraction Control – measuring both flows, applying a ratio SP, and controlling one of the flows.

There are advantages/disadvantages to both depending on the capabilities of the underlying control system. The Flow Fraction controller is advantageous because it allows operations access to the ratio SP, however not every control system can implement this type of controller. The Ratio Relay control utilizes basic control functionality however the ratio is hard-coded into the ratio function block and therefore less accessible. The accessibility of the Ratio SP (i.e., allowing operations to change ratio) may be by design – depending on the application.

Traditional PID control may benefit in performance by having an additional variable give feedback or feedforward information to the main controller. Take for example a typical outlet temperature controller on a heat exchanger. If the inlet feed was measured, it can be used to help “predict” the upcoming increase in load and help the slow-reacting temperature controller by increasing steam into the exchanger ahead of time. The inlet flow in this case is referred to as a feedforward variable. Obviously, if the biasing variable is the variable being controlled, it is referred to as feedback. 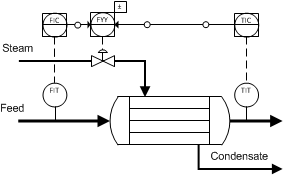 In steam generation, control of the air and fuel mixture is crucial to maintaining a safe and efficient combustion in the boiler. The idea behind Cross-Limiting Air/Fuel control is to keep the air/fuel ratio from being too lean or too rich. Because the dual nature of this constraint, a single high/low-selector will not be sufficient to implement this control strategy. Consider the following control flow diagram to adjust fuel/air ratio with demand of steam, here quantified as pressure controller based on steam header pressure (i.e, reverse-acting controller: with increasing steam pressure, lower demand). 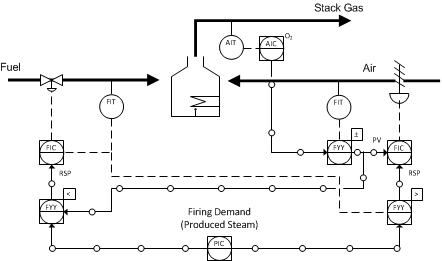 This control scheme will increase air ahead of increasing fuel, and similarly decreasing fuel ahead of decreasing of air. This also has an additional safety benefit of avoiding any unsafe accumulation of fuel at any time.

To aid in furnace performance, excess O2 is measured from the stack gases to determine the efficiency. Too much excess O2 could mean too much air and can result in cooling the boiler and inefficient combustion. This measurement is returned to the air flow PV by acting as an additional “trim” on the air flow controller, artificially inflating the value of air flow on high excess O2 and vice versa. When excess O2 is at SP, the air flow measurement returns to normal.