Tetranex would like to pass on an enthusiastic congratulations to the Alberta Tech Alliance Association for the fantastic performance of their two teams, ATA (#4334) and SWAT Bots (#5015), at the FIRST Robotics Canadian Rockies Regional.  The competition was intense and both robots showed incredible durability and reliability by maintaining their full tactical functionality after 15 or so matches of being physically clobbered by the competition.  While the games are not intended as a physical robot battle, it plays out like lacrosse and hockey with plenty of defensive “nudges” between bots. 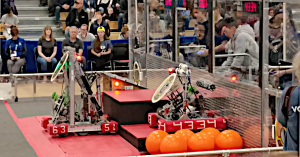 ATA (#4334) finished the qualifying rounds with a ranking of 11th out of 37 teams.  They went on to win their quarterfinal series before being defeated in the semifinals by the team that would go on to win the event.  The team was awarded the Quality Award which recognizes machine robustness in concept and fabrication.  4334 was tough to follow in the match as it was one of the fastest bots in the field. 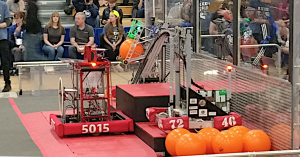 SWAT Bots (#5015) finished the qualifying rounds with a ranking of 5th out of 37 teams.  They breezed through their quarterfinal and semifinal matches and ended the event with a heart-breaking loss in the finals.   The team picked up the Gracious Professionalism Award which recognizes outstanding demonstration for FIRST Core Values such as continuous Gracious Professionalism and working together both on and off the playing field.  5015 (aka Wart-Hog) was one of the few machines of the event that could consistently end a match on the top platform thanks to it’s innovative elevator legs.  This guaranteed 12 points was a huge advantage to any alliance they were part of.

Thanks to their outstanding finish, SWAT Bots (#5015) was awarded one of two Wild Card berths and has been invited to compete in the FRC Championships in Houston on April 17 – 20 where they will compete against 400 other regional winners.  The team is looking to raise funds for the Houston trip; shipping costs alone for their 120 lbs robot are $1800.00.  If you want to help out this worthy cause, head over to their gofundme.